The History and Meaning of the Flag of Barbados 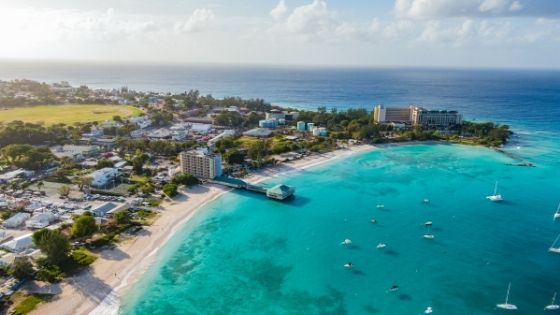 The people of Barbados adopted their national flag on November 30th, 1966, which was the nation’s first Independence Day. A local art teacher named Grantley Prescod designed the flag, and the people chose it out of over 1,000 designs in an island-wide contest. Interestingly enough, the flag has remained the same since then. Discover the history and meaning of the flag of Barbados.

Although the Barbados flag is simple at first glance, it harbors plenty of meaning. In fact, it represents the nation’s heritage and freedom. The royal blue blocks represent the sea and the sky, while the golden yellow block symbolizes the beautiful sand.

The trident also signifies the ocean, but the three points also represent three prominent aspects of democracy: a government made of, by, and for the people. Additionally, the broken trident represents the nation breaking away from Great Britain and forging along as an independent country.

The History of the Flag

Before 1966, Barbados was a part of Great Britain. As a result, they used a seal featuring a figure holding a trident and standing on a chariot pulled by sea horses, which symbolized Great Britain’s sovereignty over the seas. However, Barbados needed a new flag once it gained independence.

As a result, they held a flag design contest, and Grantley Prescod’s design was the winner. His design has remained the national flag of Barbados ever since 1966.

As you travel around the island, you’ll notice that many people display the flag outside their luxury homes in Barbados. As in many countries, there are a few significant rules surrounding flag etiquette.

The history and meaning of the flag of Barbados are more profound than you might think, and the design harbors so much importance to the people. It might not look like much to you, but the nation’s flag represents heritage, freedom, and independence.