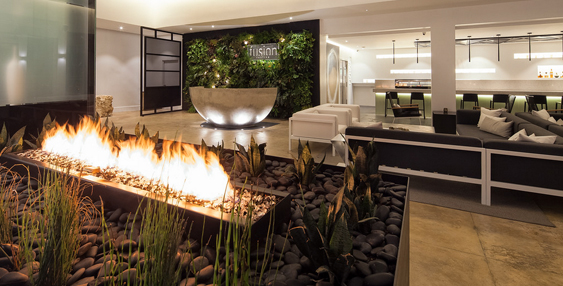 “Koncept Image Consulting was started in 2016 by myself and our second creative director Nadja Soodeen. We were aware that the owners of Fusion Rooftop at Limegrove had always dreamed of hosting a fashion show at the restaurant. So, we collaborated and started talking about it earlier this year and now we have successfully created what we hope will become a signature fashion event in Barbados.”

The agenda for the night features holiday collections and the latest fashion trends from seven select stores housed within Limegrove: Hugo Boss, Salt and the City, Sea Reinas, Tru Barbados, Always Summer and House of Jaipur. There will also be a showing of designer eyewear compliments EyeQ and an art exhibit by Elisa Zorzi. The evening will then culminate with the launch of Koncept Banz brand and one of their statement pieces - the Koncept Banz bracelet.

Acoca also highlighted that her team had a very intimate role in the model selection process, and patrons can expect to see a variation of models that truly captures the diversity of the island’s beautiful people - the most notable being the beautiful Shannon Harris, former Miss Barbados Universe 2016.

The night of fashion, food and cocktails runs from 8:30PM until midnight, and devout fashionistas and other interested persons have two ticket tiers to consider: tier one which is inclusive of drinks only (US$80); or, the VIP tier which includes not only drinks, but also a gorgeous 3-course dinner (US$175).

Tickets are available at Fusion Rooftop in Limegrove.

For further information on The Fashion Show or to reserve spaces, contact the Koncept Image Consulting team at the information below: