In 1642 and just 15 years after the first settlers arrived on Barbados, the price of an acre of plantation land was reportedly 16 shillings (Note this was the pre-decimal currency age where there were 20 shillings or 240 pence in £1 sterling). In the ensuing six-year period there was a shift from tobacco and cotton production to sugar production. This was the impetus for a boom in demand for property and by extension land values. By 1648 an acre of land was then worth £28 sterling which reflects a staggering 80% compounded internal rate of return over the six-year period. Fast-forward to 2014 and an acre of agricultural land is somewhere in the BDS $25,000 market value range, subject to a few variables such as the location, whether arable or not, the water table zoning etc. There are varying records of the evolution of plantation acreage since the mid-1600s. In 1913 there were reportedly 363 plantations comprising a total of 86,000 acres of land under plantation ownership. This represents 80% of the total 106,000 acres across the island. 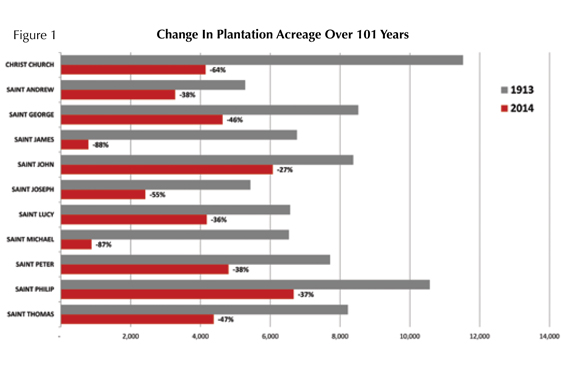 In the 101 years since then, the acreage under plantation ownership has declined by approximately 50% according to land tax records of plantation classifications. Figure 1 illustrates the reduction in acreage by parish over the period. The distinction to be made is that this does not extrapolate to a commensurate reduction in agricultural land use over the period, as there would be significant numbers of smaller agricultural land holdings excluded from the data set. Some of the plantations would have been subdivided into smaller holdings; in some cases change of use to residential, hotel/ resort golf, mixed-use or other permitted uses, would have been granted. Notable parishes would be St. Michael and St. James where an 88% reduction in plantation acreage would have occurred over the period. 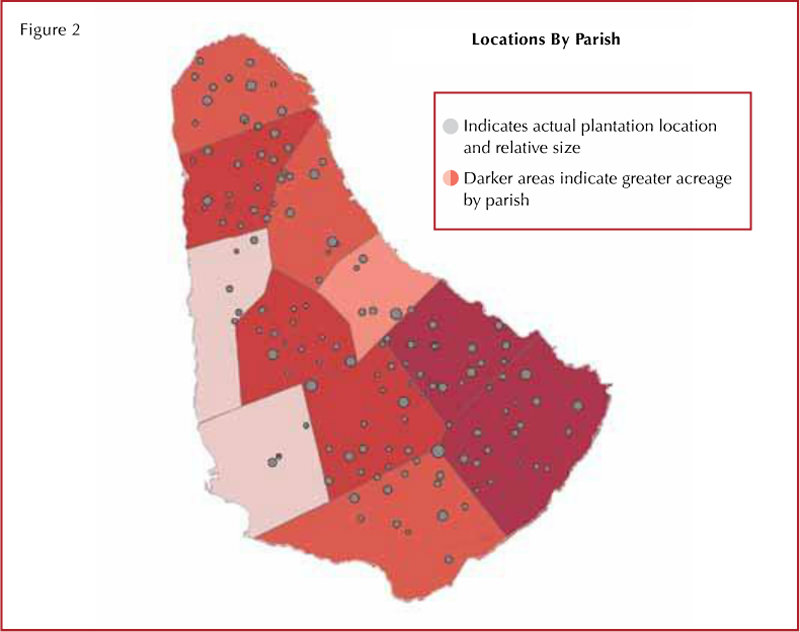 The current dispersion of plantation lands across the 11 parishes is illustrated in Figure 2. The first, and obvious, observation is the relationship of the remaining plantation lands to the densely populated areas along the south, south-east and west coastlines. The parishes of St. Michael and St. James combined have less than 4% of the overall acreage, with the largest holdings (in both number of plantations and overall acreage) found in St. John and St. Philip respectively. The total plantation holdings would now reflect approximately 42,240 acres or 40% of the island’s total acreage. 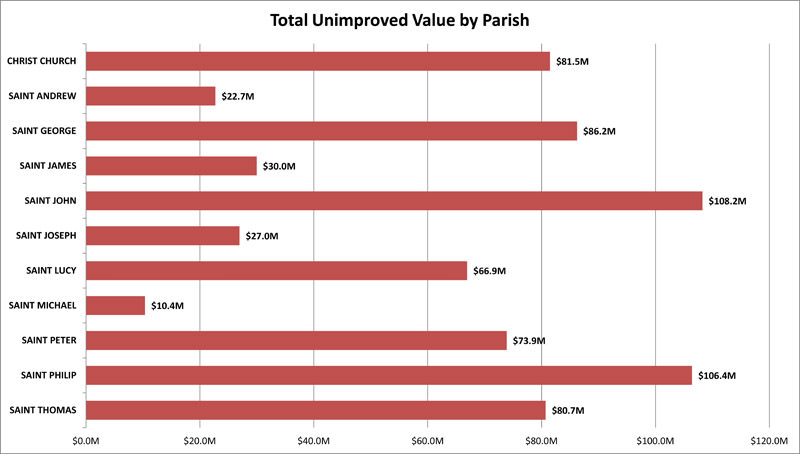 According to the land tax data, the total unimproved value of the remaining plantation lands is $693,791,2001, with the average value per acre being $16,424. Figure 3 illustrates the total unimproved value of the plantations by parish. The issue of land use and specifically the conversion of agricultural lands to other uses, continues to be a hot-button issue with many facets. There are some favourable examples of conversions such as the Sandy Lane Estate, which was transformed into a world-class hotel and residential development and yet perhaps there are also some less favourable examples on the landscape. However, perhaps this ultimately depends on the lens through which they are seen. The Physical Development Plan Amended (2003) sets out the various policies that guide the various land uses and physical planning across the island. The plan is the third such one to be adopted since the first in 1970 and the second in 1986. According to the document, at the time of publication agriculture occupied approximately 53,275 acres. However, it states that land ‘continues to be alienated from agriculture at a rate of approximately 1,000 acres annually’. This would generally appear to support the data provided in the charts above.

Whereas in the early to mid-1900s there may have been a less structured approach to land use policies and by extension plantation lands, it should be noted that the Physical Development Plan (2003) sets out a very comprehensive and strategic approach to the management of agricultural lands. The plan was intended to provide a framework for physical development until 2010. Hence there is now discussion about a fourth iteration of the plan, which will guide Barbados’ development in the coming years.

1 This number reflects the 2012 assessment. All currencies stated in BDS$ unless otherwise stated.

References: “Barbados The Sugar History” by G. Badley. | “A True and Exact History of the Island of Barbadoes” by R. Ligon | Physical Development Plan Amended (2003)”